By the end of 2021, 24 kilometers of ropeways by LEITNER will be hovering in that region.

The official opening of Cablebus 2 will take place on August 8th. The ropeway system, which is almost eleven kilometers long in total, is located in the district of Iztapalapa, in the southeast of the Mexico City metropolitan region, and will offer commuters a better and, above all, safer and faster connection to the metro stations. Since 2016, the ropeway has been relied upon in this region as public transport. By the end of 2021 a total of seven LEITNER installations will be in operation, which form a 24-kilometer-long ropeway system and will integrate perfectly into the existing public local transport network. 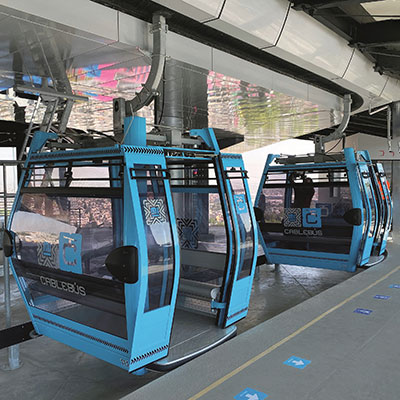 In the last year, Mexico City started the construction works for two new urban ropeways.
Equipped with more than 300 10-passenger cabins, the new “Cablebús 2” ropeway system by LEITNER will carry 50,000 people per day over a total route of 10.6 kilometres and over 7 stations. The two terminal stations of the ropeways are connected to the subway line 8 at “Constitución de 1917” station and to subway line A at “Santa Martha” station. This way, the passengers can reach the subway network quickly and the travel time for this route is reduced significantly.
Claudia Sheinbaum, the Mayor of Mexico City, emphasized that the ropeway network will not only be the best mobility solution, but will also reduce social inequalities, as a significantly improved transport option will be available for the residents.

The “Ropeway Experiment” started in the metropolitan region of Mexico City in 2016 with the construction of the nearly five-kilometer-long “Mexicable”, also called Linea Roja, in the Municipio Ecatepec de Morelos. The system in the northeast of Mexico City, which is comprised of two gondola lifts, was that starting shot for a comprehensive expansion programme, which is being expedited with very high intensity until today. Since the commissioning of the “premiere ropeway”, 17,000 people are being transported per day, so far around 25 million journeys have been recorded. The user-friendly operating hours extend over 18 hours per day. Instead of being stuck in a traffic jam for 50 minutes, the passengers reach the public transportation that leads into the urban area of Mexico City in less than 19 minutes. In addition to this, many young pupils and students live in the La Cañada area, who needed to walk several kilometers to school until 2016.

Soon the Mexicable 2 gondola lift will also be in operation 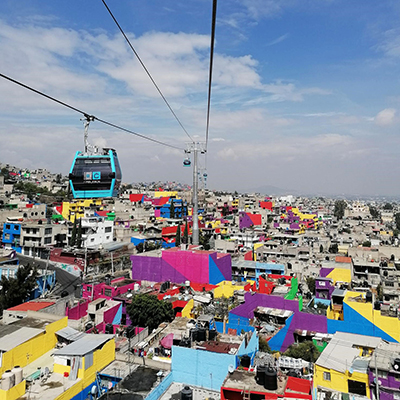 Additional ropeways are now being built in Ecatepec. With the “Mexicable 2 – Linea Verde” LEITNER is already building the second of three ropeways that are linked to one another. After completion, it will carry more than 40,000 users per day from Municipios Ecatepec de Morelos and Tlalnepantla de Baz to Mexico City and thereby also contribute to the beautification of the nature reserves to be crossed of Zacatenco in the Gustavo A. Madero district. The “Linea Verde” runs over a length of 8.5 kilometers and is perfectly coordinated with the requirements of public transport with a total of seven stations. The ropeway will form an important link in this area with the Indios Verdes subway station.