In the pilgrimage funicular railway to the Santa Cova chapel

LEITNER modernized the funicular at Montserrat in Catalonia

The Montserrat Benedictine Monastery is situated in the impressive mountain massif of the same name northwest of Barcelona and has been a well-known pilgrimage center for centuries. For comfortable transportation of the pilgrims to the various locations in the terrain, during the course of the decades, many different means of transportation have been built in this area. For example, in 1929, in addition to the rack railway of Montserrat, a funicular was also built, which links the monastery with Santa Cova Chapel, the “Holy Cave”, the location at which the sacred image of the Virgin of Montserrat was found, according to legend. Due to the damage caused by the downpour in June 2000, the original funicular had
to be reconstructed with a new system . 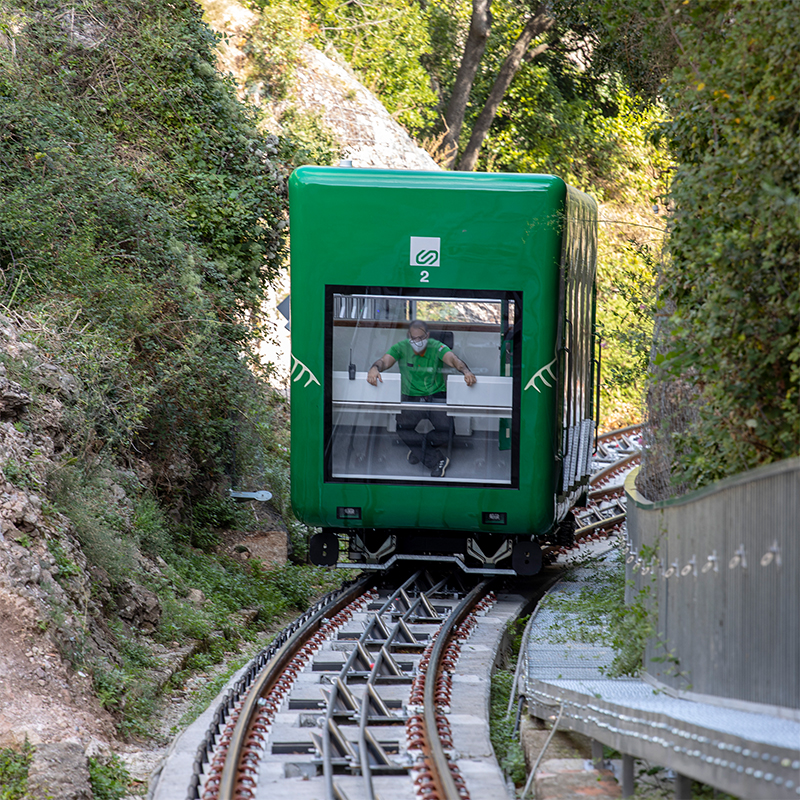 In 2018, the operating company of the railway, the Ferrocarrils de la Generalitat de Catalunya (FGC), commissioned LEITNER and its Spanish subsidiary Teleféricos y Nieve for the modernization of the funicular. The undercarriages were developed and built in the overhaul workshop at LEITNER in Leinì, the brakes and electrical technology were also replaced. The body was completely refurbished by a partner company in Salerno (IT) and the hauling cable was replaced. Overall, the wagon was to lose weight in order to achieve a higher transport capacity. The required capacity of 25 people per wagon was even exceeded - the two wagons now offer space for 40 passengers each. One of the biggest challenges with this project was the access to the railway route. This is on a very steep section of the mountain and detailed technical planning was therefore necessary for the delivery of the wagons and the replacement of the hauling cable.

The funicular overcomes a height difference of 118 meters in around three minutes over a length of 262 meters and with a maximum gradient of 56,5%. In the middle of the route, two wagons can pass by one another due to a double track section. In summer 2020, the renovated installation was able to return to service.